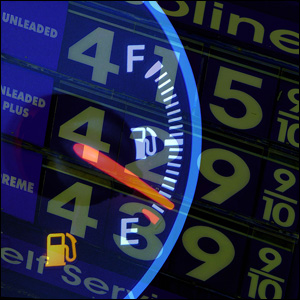 You’re standing at the gas pump watching how much it’s going to take to fill your tank. You top it off at 20 gallons.

Would you be surprised to find out that fewer than four gallons of that will actually be burned to turn your tires and push you down the road?

It’s true. The rest of the energy is lost through engine heat (about 70 percent); powering the things attached to your engine, like your alternator and water pump (five percent); drive-train inefficiencies (five percent); and idling (three percent).

Only about 17 to 21 percent of the energy your gasoline delivers makes its way all the way your tires to keep you rolling down the highway. This sounds bad, and it is, but it also presents lots of opportunities for emerging technologies to make cars more fuel efficient and greener.

Here are seven innovations that will help automakers get to the 2025 higher fuel standard of 54.5 mpg:

A lot of starving students are used to driving a car that dies every time it comes to a stop. Start-stop systems do this on purpose. They shut down at a stop and restart automatically when the driver hits the accelerator. Hybrid vehicles use this system, but there will be more non-hybrid vehicles going this way as well. It reduces the fuel lost while idling and can be especially beneficial in heavy stop-and-go traffic.

Micro-hybrids are similar to start-stop systems except they have a separate electricity storage capacity to restart the car, instead of using the car’s regular battery. Mild-hybrids are essentially smaller versions of regular hybrid vehicles. A secondary electric motor kicks in at certain times when less power is needed. Energy to drive this motor is created and stored when braking and coasting.

Since most of the energy loss happens at the engine itself, improvements here can leverage dramatic gains in fuel efficiency. One of these is the Scuderi engine, which uses paired cylinders, compressed air and a turbo charger to increase efficiency. A recent test on a Nissan Sentra resulted in an overall fuel mileage boost of 54 percent.

Advanced materials research will have a major impact on making cars greener and helping them meet our increasingly demanding fuel economy standards. The U.S. Department of Energy has been partly funding LAMP, the Lightweight Automotive Materials Program. For example, various research groups are working with polymer composites. These materials combine plastics with other materials, like glass or textiles, to make an end product that is has the strength, durability and weight reduction automakers require. Advancements will also allow automakers to use more lightweight aluminum in vehicles.

Diesel vehicles get superior fuel economy, however they have been pretty stinky to run. New diesel catalysts will fix that, making diesels some of the cleanest running vehicles out on the highway.

Although directly injecting fuel into the cylinders is not a new idea—diesels have been doing it for years—it’s only now beginning to find its way into gasoline automobiles. It’s more efficient and allows engines to run cooler which results in increased power output.

While the internal combustion engine doesn’t have to worry about being pushed out of the number one spot in the automotive world yet, fuel cell vehicles (FCV) look promising for the future. They run on hydrogen gas and produce no environmentally harmful tailpipe emissions. Right now Honda offers its FCX Clarity on a very limited basis – they plan to lease 200 vehicles in Southern California over three years. So far, its cost is too high to enjoy widespread market success.

Working at the problem from a wide variety of angles, should produce benefits from both the consumer, who would like to save money on gas, and the environment.

About the author: Roy Adams writes on topics such as autos and environmental concerns for Aspen Auto Clinic.