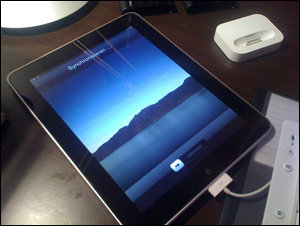 At first glance, there aren’t many differences between the iPad 2 and the 3rd Generation iPad – same size, same weight, same battery life – but what has changed has changed in a big way!

The Retina Display is the addition that has everyone falling over their feet for the iPad 3, and here are a few reasons why:

The extra pixels implement breakthrough technology that we’ve never seen before. When there are too many pixels on one plane, colors and images get distorted. Apple added the iPad 3’s extra pixels onto a new plane, which means that the signals telling them when to light up don’t get crossed. This means the pixels are so close together, the human eye can’t distinguish them. You can’t even see that it’s pixelated!

Apple’s promotional video announces that it’s “the highest resolution display ever on a mobile device!” And it’s the reason tablet PCs will never be the same again.

With a higher resolution than ever before, you need a top-notch camera to take advantage. Cue Apple’s 5-megapixel iSight camera, with:

Apple has also added their iLife and iWork Appsfor the improved display.

iLife includes iPhoto, iMovie and GarageBand. iPhoto and iMovie now have Multi-Touch, so your finger becomes your most intricate tool when adjusting images and films. iWork’s Pages, Number and Keynote programs are designed to showcase the clearer text and images.

Plus Better, Faster Wireless with more bands means the iPad 3 connects to the fastest data networks.

All to enable you to better appreciate the new, breakthrough Retina Display.

Is the iPad3 really heralding a new age?

All this sounds amazing, but…

The average user can’t tell the difference between the new iPad and the iPad2.

The Next Web did an impromptu study outside an Apple store, asking passers-by to identify the new iPad. Only 3 out of 9 people guessed correctly, some having just bought their iPad 3. Customers have commented on the improved display, especially for text and clearer, crisper photos; but you might need 20/20 vision to really notice the benefits.

The main problem will be that a lot of the content you’re viewing will not have been updated for the new iPad’s improved display. When the Apps catch up and take advantage of the Retina Display, you’ll be able to appreciate the difference between the iPad 3 and the older versions. We just need some iPad 3-worthy media (hence the new iSight Camera and improved iPhoto and iMovie). This new technology will change the way subsequent tablet PCs and their Apps are engineered.

The new iPad 3 means everybody’s going to be powering up for the retina-enabled future. Find out more at novatech.co.uk.