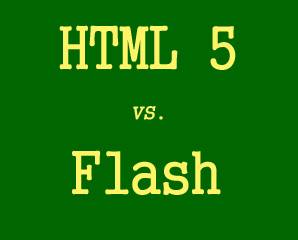 According to web giant Adobe, 85% of the top websites on the internet run Flash which seems like an incredibly high number. This got me wondering just how HTML 5 is shaping up against Flash and can it ever be a serious competitor?

Evan’s Data, a web statistics company recently polled 1,200 web developers about their usage or planned usage of HTML 5 and the results were quite surprising. From the looks of things HTML 5 is starting to gain big traction with more and more web design companies who are making the switch away from Adobe Flash.

By country, here is the percentage of developers who have committed to HTML 5:

Evan’s data added that respondents who said they were planning the switch ‘soon’ would take the total figure to roughly 75% of all web developers quizzed.

Benefits to HTML 5 over Flash:

Benefits of Flash over HTML 5:

I’m really struggling here to put Flash in a good light but I am honestly having troubling thinking up more benefits to Flash than HTML 5 other than, “it’s a more established platform”. From the looks of the above though it won’t be long until Flash becomes more and more obsolete although it still has plenty of life in it yet. Change is coming…. Slowly.

About the author: James has been a web designer for over twenty years and runs the web design site http://sussexdesigns.co.uk.